Seville (Spain), January 16-17, 2023. This congress accepts communications on the relationships between aesthetics, art, epistemology and skepticism. Submission of abstracts until 11th December 2022. 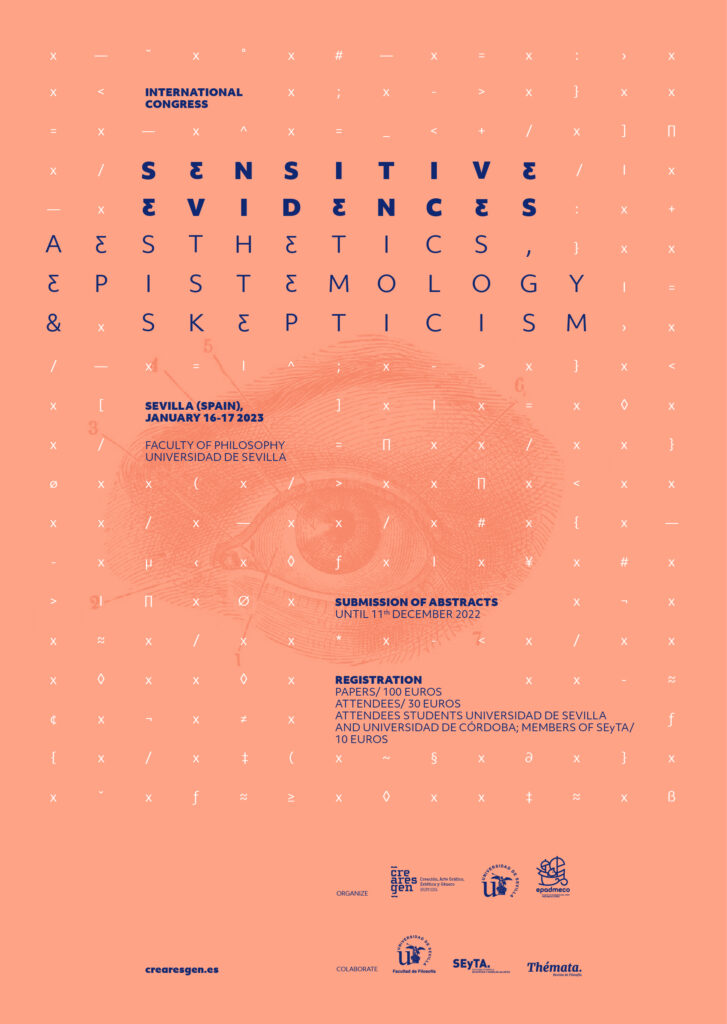 This international congress, focused on the relationships between aesthetics, art, epistemology and skepticism, is held a few days before its «mirror congress», Intelligible Evidences. Skepticism, Images and History (Córdoba, January 19 and 20, 2023).

Faculty of Philosophy, University of Seville

Approach/
The significant reordering of the epistemic realm in our day, which has led to a profound transformation of the status of truth, belief or certainty, goes hand in hand with a new configuration of the sensitive realm, of the aesthetic in the broadest sense of the term. That which is now taken as truth, as evidence or as that which is believed in, is mediated by a new visibility, a new perceptibility and a new affectivity. The intelligible and the sensible interpenetrate in a new way.

In this new context, new forms of skepticism can be discerned, which could be characterized as socialized skepticism. As an attitude and as a method, this new skepticism has reached the core of culture and its modes of action and understanding, it has become ‘environmentalised’. What is insistently called post-truth would come to be the communicative dimension of this post-factual vision in which what is true has become the object of the will rather than of understanding, and in which even verisimilitude has ceased to be a value. The new ways of affective adhesion and the new modes of sensibility have shifted the skeptical disposition from knowledge to sensibility and affectivity.

The denial and renunciation of modern truth and the modern ideal by the postmodern vision, the anti-project of Postmodernity, has become naturalized, has penetrated words and things. The very objects and media of culture –and images among them– have become imbued with the denial of any possible access to truth and viable knowledge. Skepticism has become objectified to the extent that it is no longer in the mind or attitude of the individual, but has been embedded by the object itself, especially by the image. Doubt, suspicion and uncertainty –not methodical or active, but paralyzing– are constituted as basic ingredients of the contemporary image, ceasing to be cognitive elements: images do not now speak for themselves– they need other images or words to give them meaning –but the more they accumulate and correct each other, the more they are imbued with this new character. In the postmodern context, then, human products, symbolic constructions –images, words and numbers– represent and sustain the spirit of their age, are tainted by it, or are the source of such contamination.

This contamination implies a loss of the symbol as such, insofar as it ceases o fulfil its function, or its function becomes much more fluctuating and indeterminate; for example, an image, can now be read in many ways, as can an election result, or as the performance of a government. The image has emancipated itself from its signifying character and opposes all semiotic symmetry. At the same time, the image also comes to repel all norms and hermeneutic stabilization. It is the manifestation of a mistrust, the staging of a doubt. And this is not only due to the fact that we have become accustomed to synthetic, artificial images, nor to the proliferation of images produced with the intention of falsifying an event, but also because we understand images as mechanisms of doubt. In images we no longer find information in the first place, because they have been affected by questioning. And not just the images of art, which always seek such questioning, but the images of photojournalism, of advertising, of personal life, etc. Uniqueness in meaning only occurs when an affective context has been guaranteed beforehand.

It is clear that this change in the status of images in their relation to truth is of great concern to art which in recent decades has worked insistently on this transformation, but it also affects it insofar as it is itself inserted in this regime of images.

Submission of abstracts/
Original paper proposals should be sent by 11 December 2022 to congresoevidencias@gmail.com, indicating in the subject line: Abstract Sensitive Evidences. The message should also include the following details: full name, affiliation, telephone and postal address. Proposals must be in an attached document, in PDF format, ready to be evaluated anonymously, and should include/

The selection will be made on the basis of scientific quality and connection with the theme of the meeting. Acceptance of proposals will be communicated by 20 December 2022. The official languages of the Meeting are English and Spanish. The presentation time for papers will be 20 minutes, plus 10 minutes for open debate.

HUM-364. History of philosophy. Scepticism. EPADMECO Project: P20-00306 (University of Cordoba) Pyrrhonic-empirical skepticism and academic skepticism in its historical development: the socialization of modern and contemporary skepticism: thought and enlightenment as mechanisms of rationality. 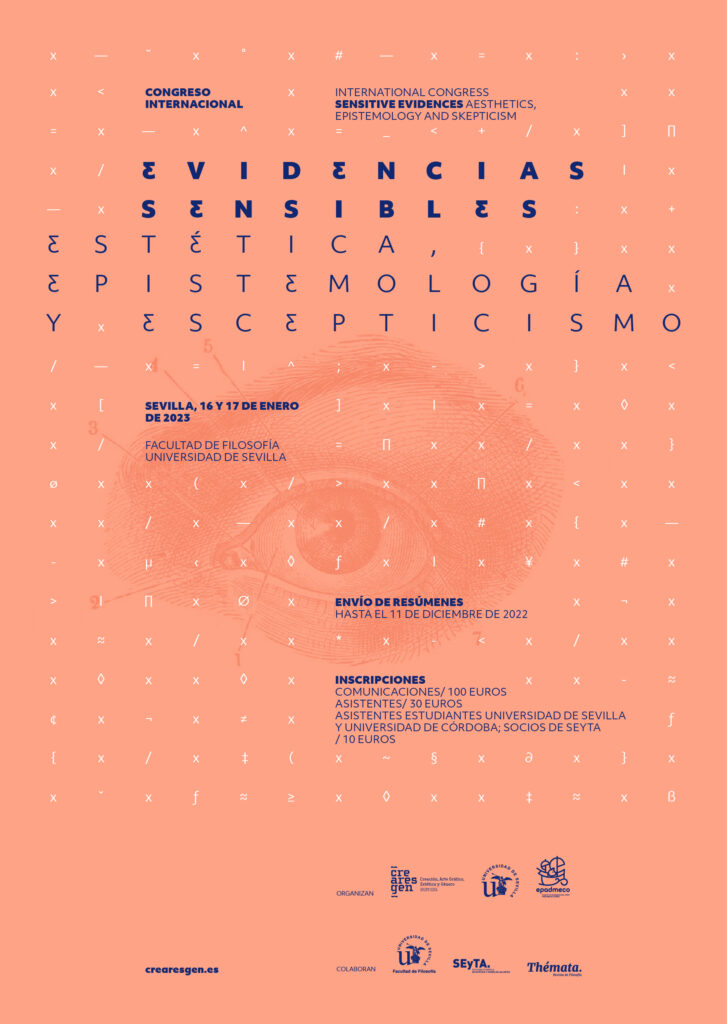 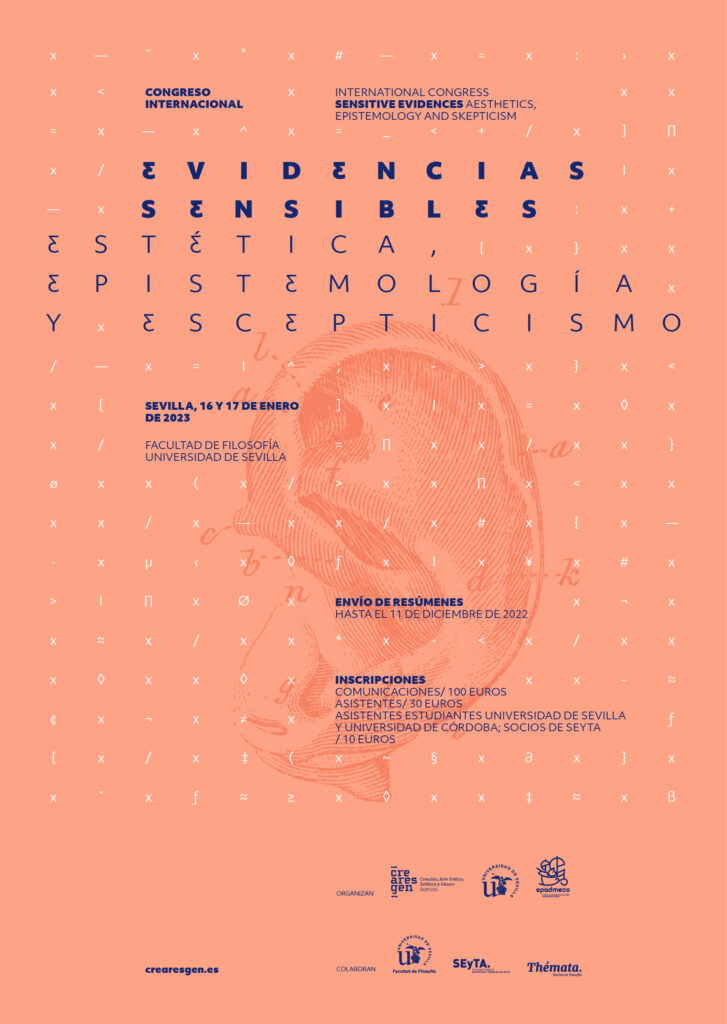