Córdoba (Spain), January 19-20, 2023. This international congress invites contributions that address the history of skeptical thought, as well as the presence of skepticism in art and in our relationship with images. Submission of abstracts until 20 December 2022. 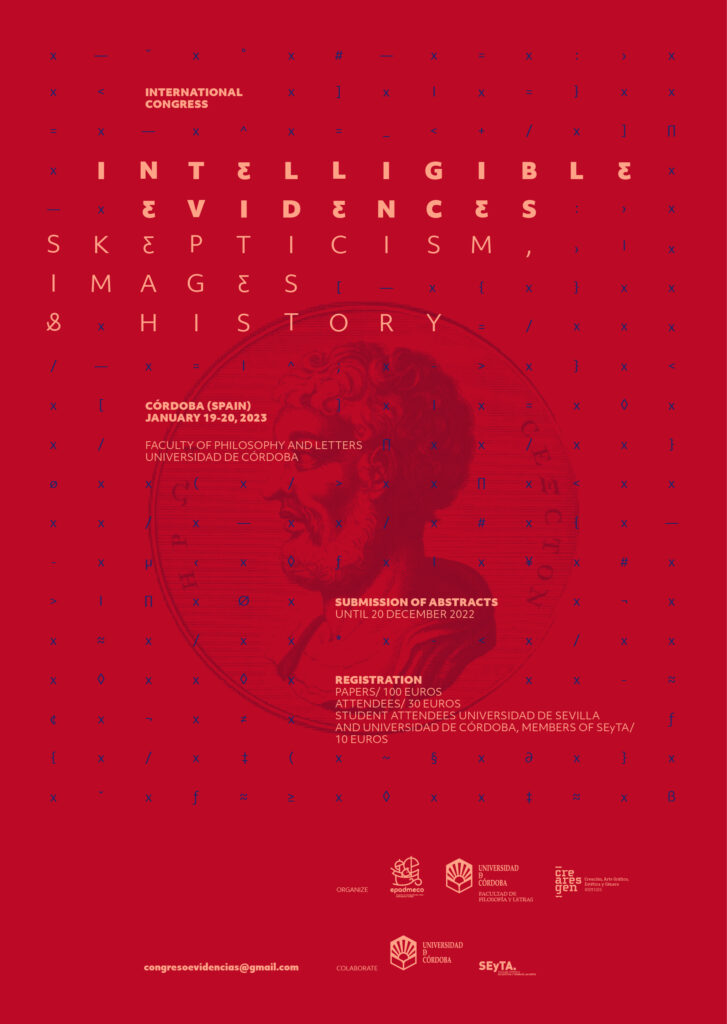 This international congress, focused on the history of skepticism and its relationship with images and art, is being held a few days after its “mirror congress”, Sensitive Evidences. Aesthetics, Epistemology and Skepticism (Seville, January 16 and 17, 2023).

Faculty of Philosophy and Letters of the Universidad de Córdoba

The History of Scepticism has had a tremendous impact on modern and contemporary philosophy. Richard Popkin, in particular, argued that the revival of pyrrhonism and academic skepticism had provoked a major ‘skeptical crisis’ in thought, arguing that the history of modern philosophy should be interpreted, to a large extent, as the history of the various strategies that modern and contemporary thinkers devised to deal with that crisis. It is well known that, at the end of the eighteenth century, Kantian criticism foregrounds the resurgence of skepticism (with particular reference to Hume’s empiricism), insofar as it assumes the project of resolving the impasses of philosophical Modernity, expressed in the double opposition empiricism/rationalism, skepticism/Dogmatism. Or to take another example, in Hegel, Scepticism was the key to the passage of the Absolute spirit, it had to be activated first if we wanted to leave the reflective field of philosophy open.

In contemporary times, two basic lines of approach to skepticism can be summarized: studies on epistemology and studies on historical skepticism. The Anglo-Saxon line is balanced, with historical and epistemological approaches, the latter being, however, those with the greatest projection in England and North America. Nietzsche and his flirtations with skepticism as the necessary decadence of knowledge, or Wittgenstein, who explored the new structures of reasons in his posthumous work «On Certainty», are examples of research on this proposed theme.

At present, the reading of images, in which the most recent concepts of skepticism have been installed, also moves us in the direction of graphic art, drawing, editorial images, etc., areas in which the skeptical condition is manifested, as a mechanism of rationality and analysis in the face of this powerful phenomenon of Dionysian intoxication that the image often entails. It is the context of the global screen, fast images that generate new monsters, an ultra-violence of the message that trivializes the image, becoming what is called «image-multiplexity», which generates multiple, confused or false stories omnipresent in our life through this screen-world. It is a matter of paying attention to this ‘visual tsunami’ of contemporaneity that provokes a turning point where a substitution of thought for the perceived in the emotions seems to take place: the word is largely displaced by the image.

This meeting, proposed by the EPADMECO Project of the University of Córdoba, has two objectives: 1. To investigate and update the authors, types, themes, problems and motivations of skeptical reflection and tradition, both in its Pyrrhonian-empirical and academic aspects, throughout the Modern and Contemporary Ages; and 2. To pay attention to the skepticism of our days turned into a socialized skepticism, which as an attitude and as a method has seeped into the core of culture (all post-truth issues touch on it), and in its modes of action and understanding has become «environmentalized», and has provoked a ‘visual tsunami’ in art, an inflection where the image tends to replace thought in the wrong way. Our era is visual, it is image, it is screen, and skepticism moves in that image, refractory to criticism. For this reason, studying graphics, a vehicle that transmits ideas and knowledge, is an appropriate way to recognize this socialized skepticism.

Organised by/
HUM-364. History of Philosophy. Skepticism. EPADMECO: Project: P20_00306 (Universidad de Córdoba) Pyrrhonic-empirical skepticism and academic skepticism in its historical development: the socialization of modern and contemporary skepticism: thought and enlightenment as mechanisms of rationality.